Report on Public Meeting held by CRA Wednesday 22nd May 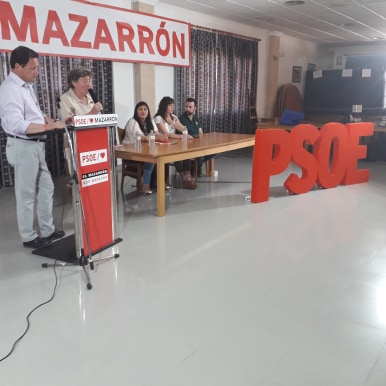 Report on Public Meeting held by CRA at Mariano’s restaurant sector A – Wednesday 22nd May at 5pm with honoured guest Gaspar Miras Lorente.

There was a good attendance with most seats taken. PSOE had more than twice the attendance of PP and CDiP who also had meetings at Mariano’s this week.  PSOE’s professional presentation, friendly and truthful approach were unparalleled and the crowd warmly welcomed Silvana and Gaspar. Gaspar will be Mayor of Mazarron if PSOE win control, and he backed up his presence with some of his team – number 2 – Placida Gomez Fernandez, number 3 – (a friendly face from Consum – Miguel Angel Peña Martinez, and also number 8 – Nati Muñoz Jiménez who at the end of the meeting presented the ladies of the audience with red carnations and the men received little gifts too.

The stage was professionally set up and prepared by members of the PSOE. Gaspar was a excellent speaker with his friendly, calm and trusting manner, and Silvana shared the stage with translations. In his speech Gaspar paid tribute to the contribution that Silvana has made to
Camposol over the last four years. If elected Silvana will be the Councillor for Foreigners and will champion the cause for expats throughout the Mazarron area – especially Camposol. PSOE plan to set up a Junta Vecinal (community of neighbours) and feedback from this community will go from Silvana direct to the Town Hall. They will also open an office on Camposol which will bypass the necessity for residents to go to the Town Hall as they can achieve all their requests for things like padron registration/renewal, copy of IBI bills etc, directly in the Camposol local office. Another important thing Gaspar mentioned which drew a round of applause from the audience, was that there will be a 24 hours, 7 days a week local Police presence. Other features Gaspar promised Camposol if elected were:

They will also obtain financial subsidies from the Government to sort out and maintain Camposol – Gaspar reminded us that the Government is PSOE, the Region is also PSOE, therefore ease of communications with a local PSOE council is much more achievable.

Silvana spoke at length about her dedication to solve the problems of Camposol and the work undertaken by her and the CRA over the past 4 years; anyone doubting her achievements were welcomed to look through the extremely thick box files she had with her. Silvana expressed her dismay at the Mayoress recent statement that her team were considering a 4th option for the redirection of the Rambla of the Aznares, without the acknowledgement or consent from the CHS. Considering that the Town Hall submitted a report to the CHS in February 2018, and to date they have not replied to the CHS letter dated 1st August 2018, it is obvious that the Town Hall is blatantly playing for time in view of the fact that a new option will mean a new report (which has not even been commissioned), a new submission of said report to the CHS for approval, and another three years before we reach the point at which we are now. If the existing report is deemed by the Town Hall to be inappropriate, they are obviously blaming those concerned in the creation and the approval of the original report of gross incompetence. Does the Town Hall realize this?

Moving on to Silvana’s wish to be Councillor for Foreigners if PSOE is elected, she pledged her loyalty and dedication, as she has demonstrated during the past 4 years.

Regrettably there was a disturbance caused by a member of a rival Party, but this served only to demonstrated Gaspar’s excellent diplomatic skills as he intervened and he tended the hand of friendship which was rudely refused by the individual in question.

At the end the crowd warmly applauded the PSOE candidates and all is set for the voting on Sunday – see our links for details of voting and free shuttle bus service to the polling station in Mazarron.

Finally everyone was invited to partake of nibbles and drinks.