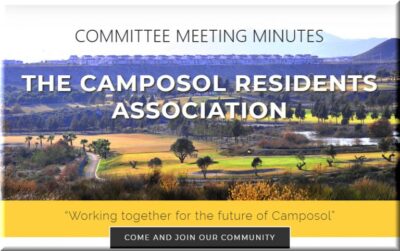 2. Treasurer’s Report
Subsequent to the meeting, GC advised the current CRA bank balance is 9239.19 euros with the sum of  353.93 euros in petty cash, giving a combined total of 9593.12 euros. There are no outstanding bills to be paid. The next major outgoings will be a second tranche of invoices from the legal team, plus the usual monthly fees to Google.

3. Next Steps
PG apologises that because he has received so much correspondence and personal problems he has been finding it difficult to keep apace and realises there are several items to action.

A further 1k been paid to the C Team for work to date. So far it has been impossible to obtain Deeds for further investigation of master plans. PG noted master plans still not approved. Perhaps this could warrant a denunciation against Notary who is claiming Deeds not available.

Also, PG has received draft from Maura to proceed with dealing with problem of the erosion of the bridge. Two letters to be sent, one to CHS and the other to Ayuntamiento with proof of delivery. C Team will write to President of Murcia as priority. C Team suggest we contact other Murcian groups in order to consolidate pressures to Region and Government.

4. Membership
Membership is gradually increasing, currently stands at 1315. Website recently hacked and new member form is inaccessible – problem of reinstatement is with Lawrence. The forthcoming newsletter will include names and contact emails for the committee members for opportunity the generate members.

5. Fundraising
PG has several approaches of people interested in helping – a lot done in 2016, notably the Fiesta etc. Proposed Halloween night has been cancelled.

NJ Suggested that committee members should put together a list of ‘events’ which we could/would be able to do and delegate some areas. Sue Tinkler could be a useful contact. PG to provide names of those previously involved to NJ.

This element will become very important as C Team really get to grips with the legal work being done. Warn residents through forthcoming newsletter that we will be seeking donations as expenses escalate. To  be the subject of a later newsletter.

6. Registration of the Association / New Committee Members
PG to contact Tina for details of the information she requires.

PG concerned that RH may well retire so new blood required as a result of dwindling numbers on the committee but also as a contingency in the case of illness or absence for other reasons.

7. Reports from the Gardening Groups

B Clean hope to finish cleaning Los Covachos. They have had assistance from Green Fingers, which has made work much more quickly. After this week hope to stop work for the summer. Problems have been experienced with reduced number groups working together as a result of Covid. Silvana had requested reduced usage of garden skips, which is an impossibility in the light of residents returning to unkempt gardens. Emptying, despite requests, cannot be done more frequently than every 10 days.

A Sector president attending one meeting of The Groups but none since. CB has twice invited someone from A to join as a representative to CRA

8.1. Security
NJ Reported he had visited the offices on A Sector and met with Charlotte Boyce of AGT, the people offering the security services. He went in a personal capacity but did explain his association with CRA. She of course immediately offered to come to a meeting and give us a presentation.

AGT is a company owned by a lady who works at the Ayuntamiento, who apparently has seen records of incidents on Camposol over an unspecified period of time, which has led her to the conclusion that Camposol needs a security service. Apparently the list of records includes, burglaries, robberies, hugger muggers etc. Charlotte says she has seen this list. I did ask how it is that a list exists that seems to contradict the police, who always say there is not enough reported crime on Camposol to justify a police presence.

This is quite disconcerting as it means that someone at the town hall is using council and possibly private information to their commercial advantage. Nothing new I suppose, but I did not want to push the point as it may have been counterproductive. It appears that the woman works in a department where she has access to such information.

The service will be open for all home owners and businesses to sign up to. In the first instance they plan to have one car for the entire urbanisation that will have 2 “highly trained” operatives who have gone through a six year training programme “similar to the police. In fact they are a private police force”. They will be Spanish nationals, who have received this training. They will patrol the whole of Camposol in the hours of darkness, probably 10.30pm until 7am in the summer and 7pm to 8am ish in the winter. They will also patrol on foot in the A and B sector business areas, ‘as a deterrent’.

They will have the right to enter premises of only ones that have signed up and can detain suspects. They are waiting authority from the region to be armed.

The legal arrangement is that AGT will contract with Salzillo (a very large national security company) to provide the services. Their aim is to have one car, double crewed for each sector, but only if there are enough customers.

This lady is definitely a sales person and refers to the fear that residents are living under, scared to go out of their houses, scared of robbers and is adamant that the police will not provide any service on Camposol as “Camposol Is not part of Mazarrón” I challenged this and although she didn’t back down, she didn’t repeat it. This will be a hard sell using fear as a driver, whether justified, or not, it seems.

I asked what additional benefit there would be for those households that have already taken out monitored security systems. She said that they will be working with the security companies. When I explored this further, it seems that this involves the customer of the security company changing the number to be called if the alarm activates. She said the benefit will be attendance within a max of 15 minutes, whereas the police could take an hour and a half, if they attend at all.

I did ask if this initiative is supported by the mayor and she said she has no reason to believe it is. Apparently she used to live on Camposol but now lives in Mazarrón.

That’s about it as a summary. The fact that the person behind this works at the Ayuntamiento is probably worthy of more investigation. As I said I didn’t want to rattle her cage on this first meeting, but wonder if we should take her up on her offer of meeting with the committee to explain the offering. Invite the lady to attend a committee meeting as offered, so she could make a presentation and we may also have reciprocal ideas. Then perhaps arrange an ‘open’ meeting. Perhaps enquire of Silvana as to her knowledge of the list which is apparently so large that this company
has been set up and yet the problem has been ignored by the ayuntamiento and the Police.

NJ had been approached by local residents regarding the lack of ability to use the football pitch. Children, notably off visitors, have been breaking in to use the area and are causing damage. The only facility provided has not been made available for use despite all other sporting facilities in Mazarrón being open. Silvana has maintained lack of ‘opening’ was non-availability of Mayor for the photo-opportunity and also, of course, Covid. Concern expressed about security and management of key holding and supervision of a suggested rota as well as the disturbance from the playing groups.

NJ still trying to obtain precise numbers of properties and thereby correct figures for IBI. Consideration could be given to properties not on private land where potentially IBI could not be chargeable. Maura’s team were instrumental in sorting similar situations where properties were built on agricultural land – rules were changed whereby where any potential demolition projects would result in mandatory compensation to the owner.

Public service on recycling bins notices required to direct deposit of recyclable to correct areas and not to leave in general bin areas. To be included in recommendations to Silvana.

8.3. Denuncia
PG considering asking Maura to assist with the issue of denunciations – perhaps starting with Aqualia with particular reference to problems on B Sector. If CHS discover there is wastage as a result of the constant leaks perhaps they could put pressure on Aqualia to deal with matters more economically. However, it was suggested that perhaps CH are not monitoring usage from them to Aqualia. Maura is investigating possibilities.

8.4. FoodBank
Food bank not progressing as originally intended and not functioned as wished for.