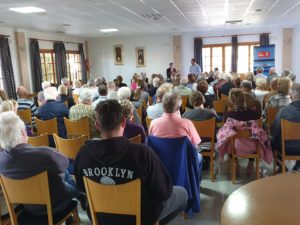 The CRA would like to thank everyone who attended the meeting, it was nice to see such a good turnout. It was also good to see that our guest of honour, GASPAR MIRAS LORENTE of PSOE, answered all questions put to him, some quite searching. His opening speech is here on our website – CLICK HERE.

However, the committee would like to highlight a number of areas that were covered in the question and answer session. These are designed to indicate what was generally said and are not direct quotes.

1) Is their proposition an entity?
ABSOLUTELY NO

2) Will sectors B, C, and D be adopted?
Paco Garcia, Mayor 2014-2015 stated at the Council Pleno that all sectors had been adopted.

3) If so why is Camposol not getting the services?
That is a question that should be addressed to the ruling PP led coalition.

4) Will the houses on Camposol be made legal and get habitation certificates?
The intention is to remove the barriers preventing properties from being made legal. However, it will be down to each owner and each property to show they comply to the relevant laws.

5) Why do the PSOE commitments bear remarkable similarity to those of 2011?
There are similarities but also differences. The problems and needs of Camposol have remained the same, but they will be addressed by a totally new team of Councillors.

6) Why should we believe that?
PSOE have already been working for Camposol, at local and regional level. They know the issues and they pledge to provide basic services like street cleaning and street lighting, but much of Camposol’s needs will only be achieved by long term plans and outside funding which PSOE look to secure from the Region, the Government and from European Funds.

“For the first-time ever we are looking to put a Camposol resident on the council. Council business is in Spanish so we need a Spanish speaker, but have one that speaks other languages too.

If we are elected, we will: