Decision made on Rambla route

On 14th August Mazarrón Council announced that the CHS (Rivers Authority) had accepted its preferred proposal for the route of the rechannelling of the Rambla de los Aznares on D Sector, after the surprise change of National Government at the end of May from PP Party control (who have shown little if any interest in Camposol) to PSOE, resulted in a shift to a new hierarchy in Political posts and high ranking civil servants, important new Officials that affect Camposol are, the National Government Delegate for the Region of Murcia, Diego Conesa, the President of the CHS (Rivers Authority) Mario Urrea and the Commissioner of Water, Javier García, all three of these at the invitation of Alfonso Baños the principal author of the Regional Assembly’s Camposol Report have agreed to visit Camposol, planned for late August early September, with a view to expedite the Inter Authority Commission which has been charged with finding solutions to the issues which face the urbanisation.

The reason this meeting is important is because before the urbanisation can move forward the planning situation of the rerouting of the Rambla on D Sector has to be resolved between the CHS, the Regional Government (CARM) and Mazarrón Council, the solution has now been agreed by all parties and the CRA will be pressing for as much information as possible on the sequence of construction and planned contingences to keep disruption to homeowners to a minimum, the planned route will enter Camposol’s road infrastructure between poligonos D8 and D9 travelling under Calle Mosquera then turning left under Avenida de los Covachos and exiting into the land between Sectors C and D (See map) the water will then flow into the Rambla de Moreras. 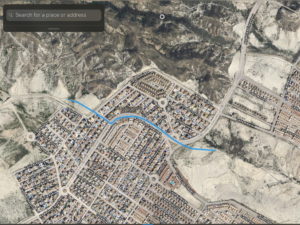 Aqualia repairs
Work is continuing by Aqualia and their contractors on reports supplied to the CRA of untreated or unfinished water leaks, we would like to thank all those who reported instances and ask for further reports to be sent to info@camposolresidents.es

Let’s explore the art of card-making over a chat or two ……. Making cards for all occasions

No fee, but bring your own project

Anyone interested in the above activities just come along at the specified time and enrol.

For further information for Spanish classes contact Silvana on chairman@camposolresidents.es