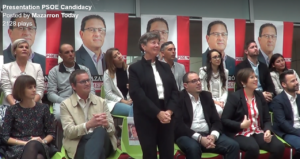 I am SILVANA BUXTON and I am standing as a PSOE Candidate in the Election on 26 May.  If elected I shall have special responsibility for Camposol and the foreign community in the Municipality of Mazarrón.

I am Italian, became a British citizen in 1975, married with 3 children and many grandchildren.  I have B.A. (Hons.) Degree in Foreign Languages and Business Studies. I am fluent in 4 languages: English, Spanish, French and Italian.  I am a retired Magistrate (UK), therefore totally committed to the values of honesty and justice.

My involvement and utter determination to seek justice came as a result of the horrendous floods in September 2014, which caused extensive damages to our property, as the destructive floods crashed through Sector D.  We discovered our house was illegally built on the Rambla, without the essential Certificate of Habitation.

I am standing as a candidate for PSOE Party as I sincerely believe, if elected, they will use everything in their power to solve Camposol’s problems.  During the last 4 years, PSOE have assisted and supported the CRA with the sole aim to resolve Camposol’s extensive problems.  Together, we have:

The Town Hall has ultimate control and total authority over the Municipality of Mazarrón, but it has failed repeatedly to respond to any of the serious situations requiring their intervention.

Together, PSOE AND CRA have achieved more for Camposol than any other Party, Authority or Organisation has ever done before, and we have laid the essential foundations upon which we can build and achieve real results.

I will work unceasingly with determination and total commitment as PSOE Councillor for Foreigners, to correct all injustices and illegalities in Camposol and the Municipality of Mazarrón.  If elected to be the presiding political party in Mazarrón Town Hall, PSOE will enable many problems and unattended situations in Camposol to be resolved.

Please read the PSOE PLEDGE TO CAMPOSOL in their manifesto, and BELIEVE in their commitment to our urbanization.

TOGETHER WE CAN ENSURE OUR DREAMS BECOME A REALITY!