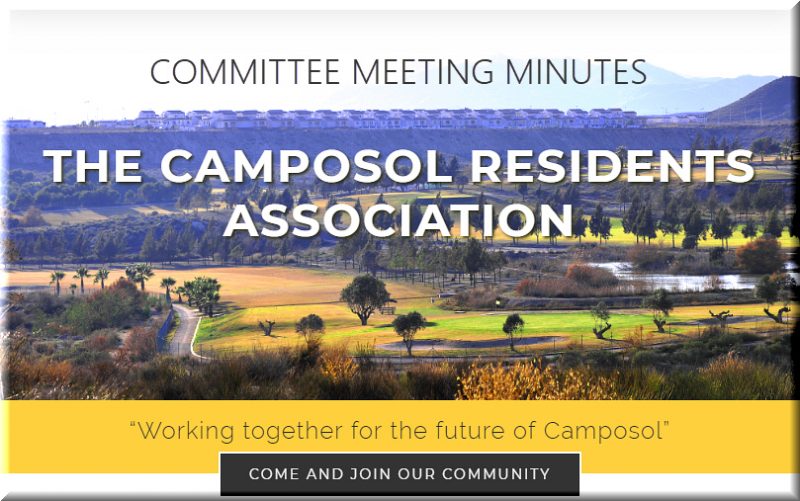 The meeting opened at 11.00 am with Acting-Chairman Mrs Silvana Buxton presiding with 8 members present.

Minute 1. The minutes from the previous meeting taken as read. It was proposed that minutes of committee meetings should not be shown on the website but can be made available to members by request to the secretary. That the secretary shall retain an electronic copy for this purpose.

Minute 2. The treasurer stated that the statement of account would be presented at the March Committee meeting. The treasurer informed the committee of her retirement from the post as from the end of March 2019. It was therefore proposed that David Shackleford be appointed as the new treasurer on the retirement of the current incumbent.

Minute 3. The matter of CRA assistance to those residents who which to vote was discussed and the plan implemented.

Minute 4. The acting-chairman notified the committee that she will be having discussions with Gaspar (PSOE) at 17.00 on the 25 January 2019 when a complete copy of the PSOE Manifesto will be requested.

Minute 5. The canvassing programme will be planned at the next committee meeting.

Minute 6. It was unanimously agreed that the Spanish teacher, employed by the CRA for the current period September 2018 until 30 April 2019, will be paid Euro 30.00 per hour from CRA funds.

Minute 7. The matter regarding business cards was discussed and suggested that the card should display joint information of both the CRA and PSOE. This will be discussed with Gaspar at the meeting with Gaspar as shown in Minute 4.

Minute 8. The CRA meeting with Gaspar PSOE will proceed in as per the date at minute 4.

Minute 9. The committee was notified that there will be a CRA/PSOE meeting to be held at 5 pm on the 7 March 2019 at Mariano’s restaurant, where the PSOE will present its Manifesto to Camposol.

Minute 10. The committee was informed that the PSOE are giving a presentation of their manifesto to the municipality of Mazarron, on the 8th March at a restaurant in Bolnuevo. Coaches will be arranged, at PSOE expense, for people from Camposol who wish to go. Timing to be confirmed at our next meeting with Gaspar.

Minute 11. It was unanimously decided to set the date for CRA Annual General Meeting during June 2019.

There be no other business the meeting was closed at 1.10 pm.