Essential refurbishment of the sewage treatment plant facilities on Camposol

Nearly 3 years after the Regional Government announced phase 2 of the EDAR (Wastewater treatment) plan for the Region of Murcia costing over 1 million euros would include Camposol’s sewage treatment plan, which had never functioned properly since MASA built it, the plant adjacent to B Sector has been commissioned and along with the work done by Aqualia to replace non-functioning waste pumps on all Sectors of the urbanisation the sewage infrastructure is now working correctly instead of releasing untreated sewage into surrounding ramblas (riverbeds), as was the accepted practice.
The CRA were made aware of this situation in the summer of 2017 after receiving a report from Aqualia detailing that 11 of the 12 sewage pumps (3 per Sector) which pumped waste to the (non-functioning) treatment plant, did not work and the pumps on C Sector did not even have an electricity supply resulting in the majority of the urbanisation’s sewage draining into the ramblas untreated, the CRA immediately lodged a denuncia with the Guardia Civil, within days Officers of the SEPRONA (Environmental) Division, attended taking water samples and photographs of the rambla (see picture), the CRA also notified the Murcia Regional Assembly’s Commission for Camposol, who in turn informed the CHS (Rivers Authority) supplying information of what was being deposited into their river network without their knowledge or consent. 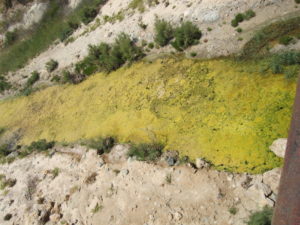 It may be coincidental, but within a week work had started on the sewage plant and Mazarrón Council announced that Camposol would be included in the next maintenance contract with Aqualia, even though according to the Mayoress Camposol has not been adopted by the Council, the Council’s estimate was that the work would be finished by January/February 2018, the work did in fact take until May to complete.
On Thursday 23rd August Joaquín Ruiz the Director General of the Department of Sanitation and Purification of wastewater for the Region of Murcia (ESAMUR) on his visit to the sewage treatment station on Camposol, accompanied by the Mayoress of Mazarrón, where work has been carried out upgrading and improvement works on the Plant for a total amount of 775,039 euros from Regional funds, providing service to a population of 3,500 inhabitants, explained that the works carried out have been continuing for 11 months. “The plant has been refurbished and adapted to the new technical and legal requirements improving the quality of water

that is reused for irrigation”.
This action is integrated into the objective of increasing the population connected to purification systems that is included in the “Plan II of sanitation and purification of the region of Murcia” enabling an improvement of the environment and the increase in the volume of water regenerated for the availability to the farmers in the area.
The work carried out has included entrance improvement, bypass assembly, regulation raft, fire extinguishers, rough channelling, Sand remover-degreaser, biological reactor, secondary decanting, flow measurement, chlorination matrix, sand filtration system and other electrical type facilities.