At the end of June the CRA received a request for help from the staff of the Medical Centre (Consultorio) on Sector A, for many months the air conditioning and heating in the waiting area had not been working making the wait to see a doctor or nurse in a room, which has two large hot house windows directly receiving full sun a very hot and sticky experience, yet despite numerous applications for repairs from Mazarrón Council, who own and are responsible for maintenance of the centre, nothing was happening and no response was received from the Town Hall, even after a written intervention by Pablo Moreno the Chief Health & Safety Officer for Mazarrón asking for the situation to be resolved, pointing out that air conditioning is not a luxury in a Medical Centre it is a necessity, there was still no action from the Council.

Silvana Buxton Acting CRA Chairperson arranged a meeting with Sr Moreno and discussed how best the CRA could help, it was decided that contact should be made by the CRA representing patients and staff who use the centre with the Murcia Regional Health Service Officials to alert them to the situation and solicit their assistance, to this end on the 19th August the CRA wrote to the Regional Health & Safety Official Pepa Alonso, Regional Director General of Services, José Francisco Romero, the Regional Minister for Health, Manuel Villegas García and Maria Teresa Martinez Ros, Regional Director General of Planning, Investigation, Pharmacy and Patient services.

On the 3rd October a new Air conditioning unit (hot and cold air) was delivered to the Medical Centre and on 9th October engineers arrived and installed the new system which is now operational, the CRA were also in contact with Gaspar Miras Lorente, Mazarrón Councillor.
There are other issues with the Medical Centre building which the CRA will address with the relevant authorities, but air conditioning facilities were considered the priority with the staff and service users. 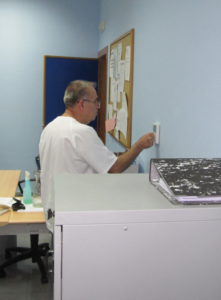